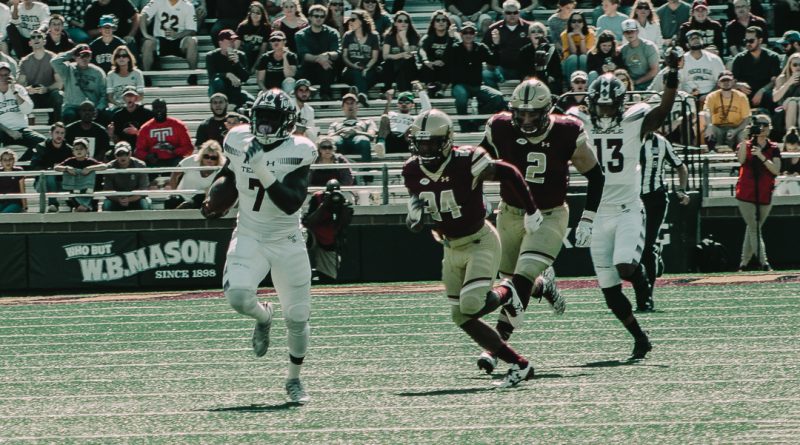 Despite a career performance from Ryquell Armstead, the Temple Owls were not able to capitalize and secure a win against ACC opponent Boston College, losing 45-35.

Temple entered Chestnut Hill on Saturday as underdogs with a 2-2 record coming off a conference win at home against Tulsa. After a long week of rest, the Owls were looking for an upset win against a previously ranked Boston College team.

“They were a tough opponent who played hard,” head coach Geoff Collins said. “I’m still proud of every single one of those guys in the locker room.”

In games before this week, Collins stressed the importance of striking first to put the momentum in their hands early. Although this was not the case Saturday as the Eagles were the first to find the end zone, the Owls were able to quickly answer twice in the first quarter and entered the second quarter leading 14-13. In the second quarter, the Owls started off hot by putting up another touchdown and leading the game 21-13 but lost control as the Eagles scored two touchdowns and a field goal to enter the half with a dominating 10-point lead.

The second half showed an Owls team that may have been shaken up after a disappointing end of the first half. Boston College head coach Steve Addazio was 28-3 when his team led going into halftime.

Time wound down in the third quarter and Temple was able to bring themselves back into the game after scoring 14 unanswered points with less than seven minutes remaining.

Unfortunately, their efforts came up short and the Owls were not able to secure a win.

The loss, while tough to swallow for the Owls, featured several bright spots for Temple heading into week six and the rest of conference play.

Anthony Russo, who started, threw for 255 yards, which is his season and career high. While he went 20-for-45 in pass attempts, he could have had a better completion ratio if his receivers didn’t drop the ball as much as they did.

“I just want to let them know I have all the trust in the world with them,” Russo said regarding Temple’s receivers. “Everyone drops balls. We just have to move on and get ready for ECU next weekend.”

The offense was able to put up 452 yards, with 204 gained from rushing attempts.

Ryquell Armstead had another stellar game offensively for the fourth week in a row. In this road matchup, Armstead put up 172 total yards of rushing offense on 24 attempts. The only two other players who had notable offensive days were Jadan Blue and Isaiah Wright who each had two attempts for 11 yards.
Armstead recorded four touchdowns before the almost-four-hour game came to an end. The last time a Temple running back had four rushing touchdowns in a game was when Montel Harris recorded seven touchdowns game versus Army in 2012.

While he had an out-of-this-world performance, Armstead was disappointed in himself and felt that he could have done better for his teammates and coaches.

“There were plays that I could have been better,” Armstead said. “Ultimately, I did not win the game, and that’s where I came up short for my guys and my coaches.”

No matter the result, the Owls put up a fight against a strong Power 5 conference football team. The Owls’ defense were able to hold an explosive Boston College offense to only 423 yards.

Full conference play opens against East Carolina University this upcoming Saturday at noon at Lincoln Financial Field. The Owls are focused on the rest of the conference and how their rivals have performed in the opening weeks of the season. Key opponents Temple will still face include Cincinnati, USF, and UCF. The Owls still have a viable chance to have an impressive conference resume and vie for the conference title.