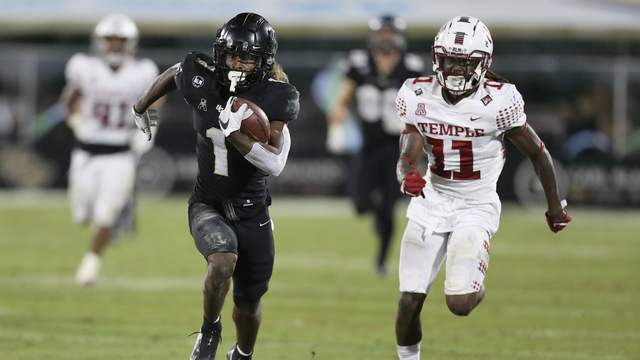 In the second play of the Owls’ (1-5) primetime matchup at UCF (5-2, 4-2), the ball was torn from quarterback Re-al Mitchell’s hands by Eric Gilyard, setting up a short field Knights touchdown.

A handful of plays into the next drive, UCF linebacker Tatum Bethun fought through two blockers to intercept a bubble screen attempt, leading to seven more points for the Knights less than five minutes into the contest.

It was a fitting start for a long, bitter 38-13 loss in a season full of them.

“The whole game boils down to the beginning,” Temple head coach Rod Carey said. “We dug ourselves in a hole we didn’t have the firepower to get out of.”

The Owls strung together 290 total yards of offense. After a field goal late in the first quarter, Temple was scoreless until a touchdown from redshirt freshman running back Onasis Neeley early in the fourth quarter, when the game was already out of reach.

Quarterback Re-al Mitchell, making his first career start due to Anthony Russo being in COVID-19 protocol and an injury to Trad Beatty, went 10-for-23 with 107 passing yards and two interceptions.

After three straight UCF touchdowns, the defense regrouped and put together a fairly impressive outing, holding the Knights scoreless for the rest of the first half after three consecutive touchdowns to open the game.

While UCF scored three more times to open the second half, the high powered offense was held to their lowest total yards of the season with 419 and their second lowest point total.

“I feel like we did a good job prepping throughout the week,” junior defensive end Arnold Ebiketie said. We knew the players, we knew what was coming. It goes back to the Tulane game and winning the line of scrimmage.. And just being physical and playing hard.”

Ebiketie, who has quickly emerged as a leader of the defensive unit,  led the team with nine tackles, as well as a sack and a forced fumble.

The performance of redshirt senior running back Tayvon Ruley was a bright spot. After a solid debut as the feature bak after the departure of Re’Mahn Davis, Ruley put together an even stronger second outing, running for 90 yards on 23 attempts.

The performance was all the more impressive, given that it was behind an offensive line that was down three starters by the end of the night, with right tackle Michael Niese ruled out prior to the game, and left guard Joseph Hooper and right guard Adam Klein going down mid-game.

Starting corner, senior Linwood Crump went down with a lower body injury and had to be helped off of the field, a tough loss for an already depleted secondary.

Jadan Blue was the Owl’s leading receiver with 71 yards on five receptions. No other receiver had more than 15 yards.

With the loss, Temple drops to 1-5 on the year, UCF improves to 5-2. Temple will host East Carolina next Saturday at noon.

John DiCarlo with Zach and Andrew!