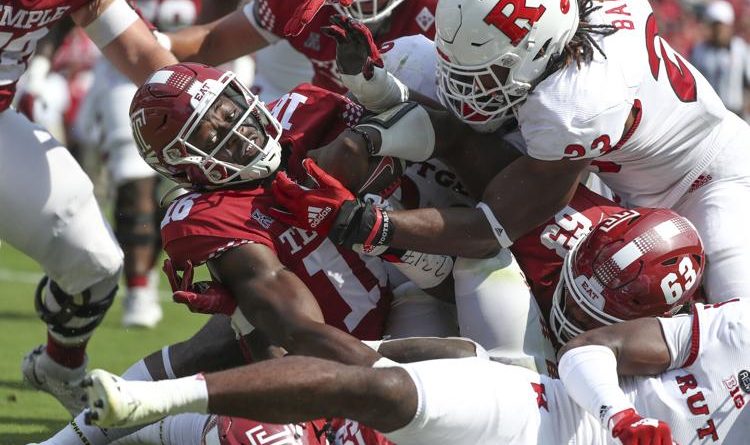 The Owls took the field before a rowdy crowd of over 33,000 at Lincoln Financial Field, looking to make a statement against Rutgers of the BIG10 on homecoming weekend, but couldn’t get the job done, losing 16-14.

A late offensive drive fell short for the Owls, giving the Scarlet Knights the chance to run the clock out and take their third win of the season.

The game started with a near brutal blow on the very first play from scrimmage. Temple’s freshman starting quarterback E.J. Warner was looking for wide receiver Jose Barbon, but the route was jumped by defensive back Robert Longerbeam. If Longerbeam had made the catch, he would have walked into the endzone and put Rutgers up 6-0. The drive ended in a three-and-out.

Temple’s defense took the field for Rutgers’ first drive looking to make a statement, and that’s exactly what they did. The Owls forced a quick 3 and out, which allowed the offense to come on the field and make some noise.

Wide receiver Adonicas Sanders was the go-to man in a 2:39 drive that saw 12 plays for 73 yards and ended with a touchdown. Sanders caught three passes for 48 yards and had one rush for 10 yards. His 10-yard rush put the Owls at the Rutgers 1-yard line.

Temple head coach Stan Drayton decided to go with backup QB Quincy Patterson on 2nd and goal, and that decision led to a 1-yard touchdown run, which put the Owls up 7-0 after kicker Rory Bell nailed the extra point. That was Patterson’s first touchdown as a member of the cherry and white.

After Temple’s defense forced another three and out and then a 45-yard field goal, Warner threw a pick-six to Rutgers cornerback Shaquan Loyal, which put the Scarlet Knights up 10-7.

The next drive, Drayton decided to go for it on 4th & 1 from his own 34-yard line, and he put his trust in Patterson. Patterson bobbled the snap and rushed for no gain, putting the defense in tough field position. However, the defense stepped up in a big way, forcing Rutgers into a 38-yard field goal opportunity, which was missed wide right.

Sophomore defensive lineman Darian Varner credits a great week of practice for being the reason the Owls defense strived when being in short field situations.

“All week we’ve been practicing scenarios like that,” Varner said. “I think the defense took advantage of that and applied it to the game.”

Rutgers received the second half kickoff and was forced into its fourth three and out of the game.

After a 25-yard field goal by McAtamney with 7:28 remaining in the third quarter, Temple found themselves down 13-7. The offense came on the field to try and respond but were stopped on 4th & 2 at their own 44-yard line, once again putting their defense in a tough position.

Another field goal by Rutgers extended the lead to 16-7, but the Owls immediately responded after an unnecessary roughness penalty by Rutgers on the kickoff put Temple at its own 40-yard line.

Temple needed just two plays and 34 seconds to find the endzone. Warner found Sanders for 13 yards and then found tight end Jordan Smith in the middle of the field for a 47-yard touchdown, making the score 16-14 after Bell converted the extra point.

Drayton has high hopes for Smith moving forward this season and will continue to use him at a high rate, even when David Martin-Robinson returns.

“If he keeps making plays the way he’s making them,” Drayton said. “We will expect to get him the football. We will make the system fit for him and DMR when he gets back. We can’t allow a football player not to play when he has the ability to make plays.”

A sack by Temple on 3rd and 8 forced Rutgers to punt, giving Temple the ball with a chance to take the lead. However, with 2:29 remaining in regulation, the Owls went for it on 4th and 4 from their own 41-yard line. Warner faced immediate pressure, forcing him to get rid of the ball quickly to Sanders, but the pass was incomplete.

“That play was not on EJ,” Sanders said. “that was a bad read by me…I didn’t read the coverage right, so that was a bad play by me.”

The Scarlet Knights got the ball and never looked back, racking up two first downs and running down the clock all the way to zero.

The win gives head coach Greg Schiano the most wins all time by a Rutgers head coach.