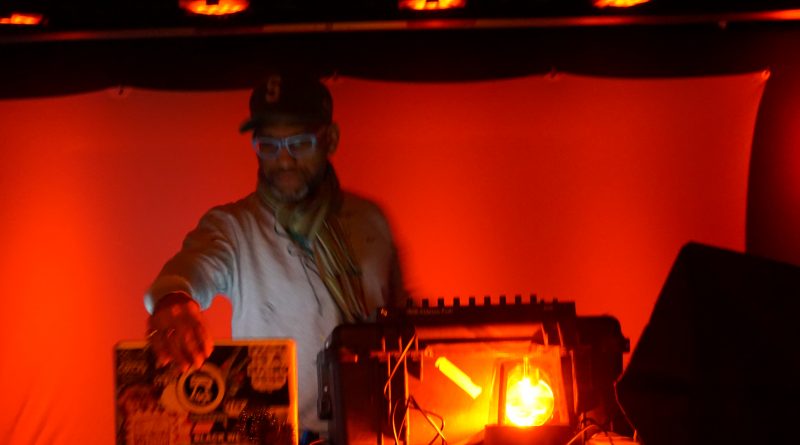 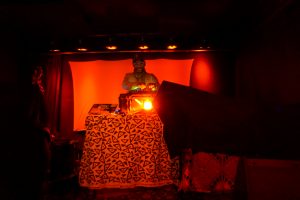 The hip hop duo Shabazz Palaces arrived in Philadelphia on a brisk Sunday night to
play a set at Boot and Saddle, with Philly’s own King Britt slated as the opener. I’d been
meaning to catch the eclectic act in person for some time, as I’ve always believed the group’s
style is unrivaled by just about anyone in today’s scene. They have managed to create a
seamless sonic blend that hinges on frontman Ishmael Butler’s (aka Palaceer Lazaro aka
Butterfly of Digable Planets) golden age bonafides along with partner and multi instrumentalist
Tendai Maraire’s Zimbabwean roots music expertise. The result is an experience that blends
the lines of what hip hop is and can be and that pushes forward with a sound and vision 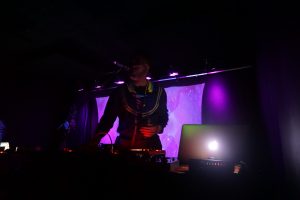 contrary to much of the rap mainstream.

Arriving to the show that night I talked with some people in the audience about their
expectations for the night. The crowd was seemingly a blend of all the disparate factions of the
city, both young and old, black and brown and white, individuals seemingly pulled from all walks
of life gathered at the South Philly bar united by their deeply held appreciation for the
uniqueness and prolificacy of Shabazz. Many seemed particularly into the fact that they would
being seeing the group at a smaller venue for the first time as opposed to their stops in years
past at some of the larger clubs around. The concert ended up having the vibe and intimacy of a 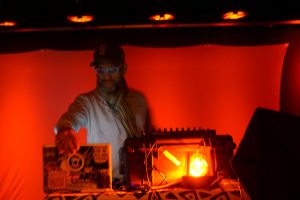 homecoming show; King Britt is as fine a representation of the Philly scene as there is, and Ish
made multiple references on stage to his family’s own Philadelphia roots during the set. The
unique atmosphere produced the sort of unity that can uniquely be brought out by good music
and a shared headspace among strangers. The show that night felt affirmational and deeply
rooted in the personal in the way that all good shows should.

King Britt took the stage promptly at 8:30 pm to a small room filled with only a few people
at first, that swelled to a head nodding mass towards the end of his time. Britt is quite the 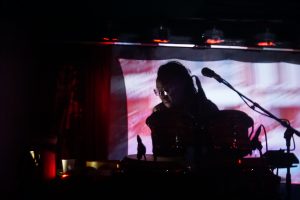 shapeshifter in the music scene, working alternatively with mainstream artists like Solange to
underground mainstays like Madlib, all the while crafting avant garde AV installations with his
collectives Fhloston Paradigm and Sylk130. I had never heard of him before the show but came
away impressed with his beat experiments, which combine socially minded audio samples with
intricately worked, booming jazz flavored beats and ambiance straight out of Blade Runner. It
had all the elements of a mish mash between Gil Scott Heron, Vangelis and classic boom bap,
maybe with some Boards of Canada thrown in for good measure. A particularly moving
composition utilized the audio of a police scanner that had set its sights on a young black man
as a powerful statement of political resistance against the historically oppressive conditions
present in many of the marginalized communities in our country. The room was about ready to
explode for Shabazz as King Britt broke down his equipment, and they certainly delivered. 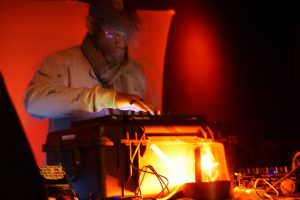 Instead of appearing from behind the curtain on stage, entered from the back, parting
the sea of people in front of them effortlessly, delighting many. One particularly excited
concertgoer proclaimed that her shoulder would never be washed again following a brief
encounter with Ish’s shirt tassels. The duo, after a brief introduction, launched into a cut from
2011’s Black Up, “Free Press and Curl,” which dropped on the crowd with the force of an
interstellar atom bomb. The crew deftly navigated their set, featuring selections from their entire
oeuvre with an approximately even distribution. I’ve never quite seen someone as adept as a
percussionist up close as is Maraire; the dude killed every section of every song, from his 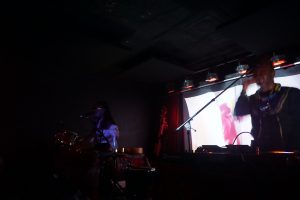 incredible mbira flow, cycling through all varieties of drums and styles of playing, he was absolutely impeccable. And Ish can still MC with the best in the game, he maintains complete
control of the room from start to finish. To my mind his flow and his bars are near to being
unmatched, even from his days in Digable Planets he’s only gotten better by leagues, appearing
before us now as a perfect, cosmos spanning, hip hop alien. 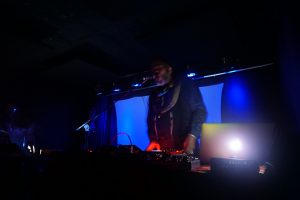 Their set did drag a bit towards the end, maybe the result of the two hour run time, or the
more abstract soundscapes that backloaded the set, or perhaps the pounding sub bass present
during the entire run time, but Shabazz never let up on the energy. Their live show is a fun one
to be sure, the afrofuturist visuals which accompany their act are really cool and well produced,
and the duo has been known to deploy synchronous dance moves straight out of Soul Train.
Finishing off with “Shine a Light,” and taking time to make sure to thank the crowd, Shabazz
departed to a large ovation, having thoroughly satisfied the culture hungry masses, and primed 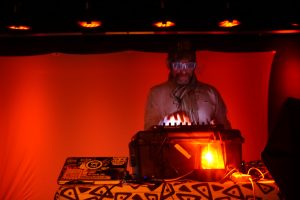 to spread funk wherever they may be needed next. Music that pulls from such a wide range of
sources like Shabazz Palaces’ does and provides such a unique live experience is a must see
in my book, and more than that and is so incredibly important to support in a music landscape
that is anathema to creativity and positive energy. In the immortal words of forerunner Sun Ra,
“The earth cannot move without music”, and Shabazz are doing a good a job as any to keep this
dull rock from dying out. 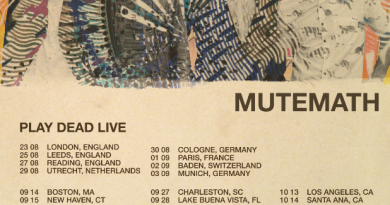 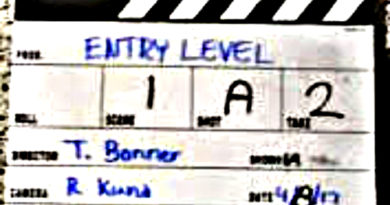