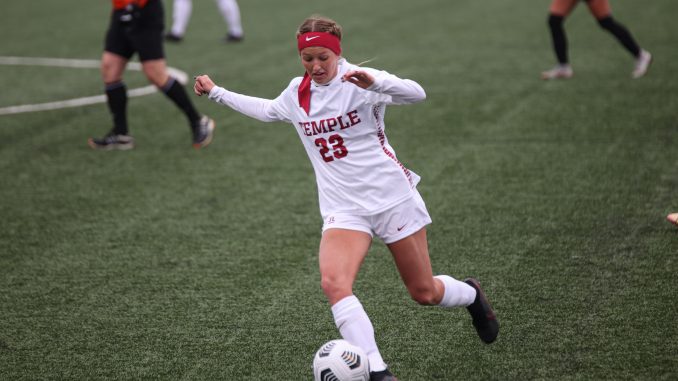 Temple and USF faced off Sunday afternoon for the Cherry and White’s second conference game this season.

The Owls traveled to South Florida after a beautiful 3-0 road win against Villanova earlier this week.

Temple was looking to keep the momentum going. However, the 2019 AAC Champion USF Bulls opened up their 2020 conference and home slate with a 2-0 victory over the Owls.

The Bulls took the lead just seven minutes into the game. Senior midfielder Katie Kitching opened the score with a left foot one-touch finish from a right-side cross assisted by Paula Leblic.

“We have struggled with our starts the past couple of games,” said senior defender Marissa DiGenova. “Letting in early goals has been a weakness so far.”

Three minutes after scoring the first goal, USF had another chance to double the lead, but Temple goalkeeper Kamryn Stablein made her first save of the game in what was to be an outstanding performance under the three posts for her.

“Kam had some great saves and came up for us big time,” defender Marissa Digeova said. “She’s great back there and a great voice to have directing the backline.”

After her first assist early on the game, Lebic would put up her own goal from a free kick in the 28th minute. The ball was deflected into the net by the Temple defense to double the distance between both sides.

The first shot for Temple came at the 43rd minute from senior captain Julia Dolan who tried to narrow the distances between sides, but the attempt went off target.

USF was the better team on both sides of the ball in the first half. The Bulls took advantage of the field spaces by generating dangerous chances and keeping goalkeeper Kamryn Stablein focused for 45 minutes.

Temple started the second half, ready to come back from a tough first 45 minutes of play with a shot on goal from Sophomore transfer Teri Jackson in the 49th minute.

However, once the home team found itself on the field, the game followed the same path that the first half did. The Owls defended on a low block, while the Bulls kept the possession by moving the ball from one side of the field to the other.

USF’s 2-0 lead held into the second half, and even though the difference between both sides could have been more significant, Temple’s goalkeeper did not allow USF to find the net.

The Bulls shot 24 times during the game, with 12 of them on target, but junior goalkeeper Kamryn Stablein stepped up by clutching a total of ten saves throughout 90 minutes.

The Owls didn’t create many chances throughout the game with just two shots and none on target. That is an aspect the team has to improve for the rest of the season.

“We need to shoot more and create more offensive chances,” DiGenova said. “We need to go into this week of training with a lot of intensity and willingness to win.”

The Owls will play East Carolina next Sunday, Feb. 28, at 1 pm for their third conference game of the season. The game will be available to watch on ESPN+.

Jon Rothstein of CBS previews the Temple Basketball Season with Zach and Chase! 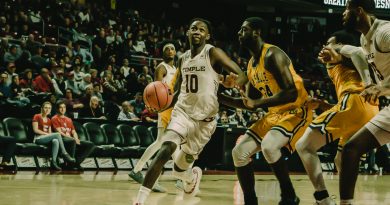