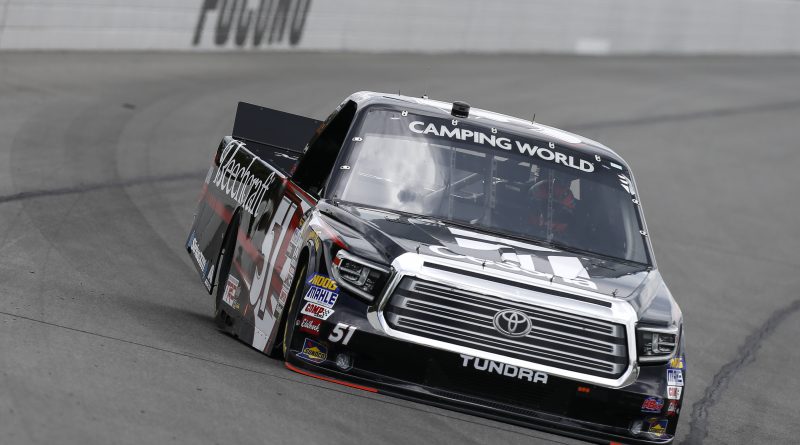 After Gragson, driver of the number 18 Kyle Busch Motorsports truck, was not allowed to race due to a stomach illness, Jones was asked to step into the car and compete in the Gander Outdoors 150. Busch wanted Gragson to race, and he would’ve if NASCAR didn’t disallow it.

“If I’m a racecar driver, I’m up for anything,” Kyle Busch said on Gragson not being able to race. “I’m sure that the racers back in the 70s raced with no eyes, you know? We’ve seen that, they had to tape their eyes open, you know, and they were allowed to race. So times have obviously changed. I think that there’s more opportunities for people to hold you out of a race, which is scary.

“I just gotta rely on the medical staff and hope that I’m never sick,” Busch added with a smirk.

It was the first time Jones had raced in a truck since his lone start in 2016 at Gateway Motorsports Park, but he settled in easily. After climbing his way through the field and fighting Kyle Busch for the majority of the race, Jones was relegated to a second-place finish after Busch was able to defend his position with under 10 laps left to take home the victory. It was more difficult than Busch thought it would be, as Jones was charging hard.

“He was way faster than he was this time than he was last time,” Busch said, referring to a battle three years ago between him and Jones.

With the win, Busch tied Ron Hornaday Jr. for the most wins in Truck Series history with 51. He also became the first two-time Truck winner at Pocono. Busch gets a lot of flak for driving so frequently in the Truck series while being a Cup driver, but his record is nonetheless impressive. Jones’ comeback drive was equally impressive, considering he stepped up to the plate just an hour before the race.

Rookie Dalton Sargeant drove to a 3rd-place finish, his first-ever top-five in 20 attempts. It’ll be very difficult to make the Playoffs on points merit, considering he is over 100 points back of the final Playoff spot. A win at Michigan or Bristol would clinch a spot in the Playoffs.

You better believe he thought about the possibility of Busch and Jones crashing each other out.

“I thought about it for a little bit, honestly!” Sargeant said in the postrace press conference. “You know, I felt bad for a minute. I held up Erik, it seems like, a little bit at the start of that run, but, you know, I was hoping I would have a little bit more for those guys randomly taking two tires under that green flag stop.”

Solid races from Stewart Friesen and Grant Enfinger helped them solidify their places in the Truck standings, as they finished fourth and sixth, respectively. Enfinger sat sixth and Friesen sat seventh in the Playoffs standings coming into the race. Matt Crafton finished ninth, and even though he has a very sizable advantage over the rest of the field in points, he’s subject to being booted from the Playoffs altogether if a driver outside the top-eight is able to go to Victory Lane.

The next Truck Series race is set to be held on August 11th at Michigan. Five days after that, the final regular season race will be held under the lights at Bristol before the 2018 Playoffs are set.

Mets and Phillies coverage on TSH!