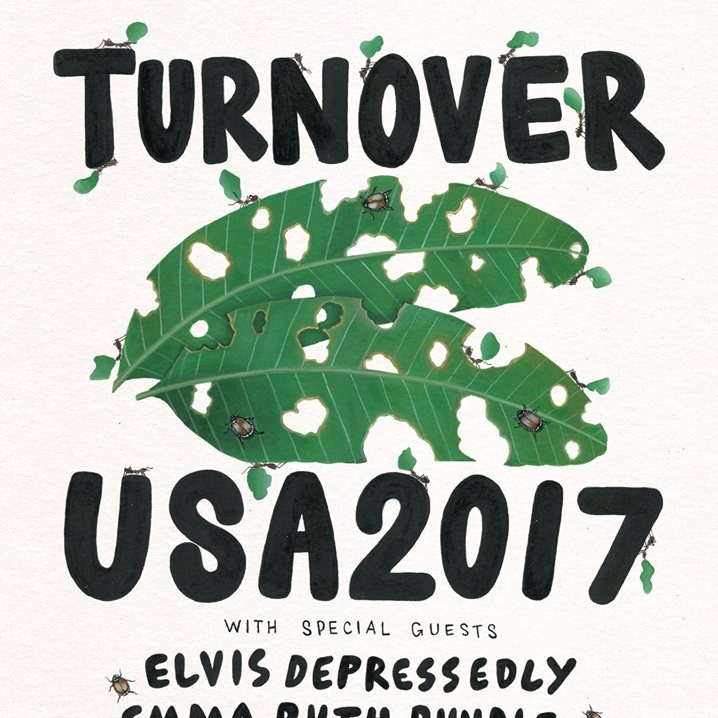 A Saturday night on South St. in Philadelphia can draw large crowds of people for any number of reasons, but it was the musical sounds of Indie-Rock band Turnover that brought hundreds to the Theater of the Living Arts (TLA) on Nov. 18th. A crowd so large, that band front man Austin Getz called it the biggest crowd the band had ever performed for, which is impressive considering Philly was their second to last stop on a thirty-five-venue tour around the U.S.  The brisk cold turned into warm surroundings upon entering the TLA as the sounds of tuning instruments foreshadowed a three-band performance that would be sure to keep the crowd cozy in their standing room admission.

Opening the concert was Boston-native artist Pronoun (Alyse Vellturo) and her supporting band, who only joined the tour a week before the show. This was due to the previous opener, Emma Ruth Randle, not being able to finish out the tour. Pronoun gained a fan in me as she took the stage riddled with anxiety, talking of how nervous she was to be playing for her biggest crowd ever. Although this was the case, as soon as she began to sing the lyrics to her first song “til your legs give out”, there was nothing but streamline confidence and a sense of hurt in her voice.

The crowd gave immediate resonation as the entire room filled with a positive energy, alluding to the fact that it was clear Pronoun was there to be much more than a replacement opening artist. Every individual began to show interest, receptively grooving to the song almost all at once. Pronoun followed up with her most famous song “just cuz you can’t” and instantaneously I was hooked, as I proceeded to add her to my Spotify playlist at the conclusion of the song. In a six-song set, Pronoun spoke of the melancholy meaning behind the name of her only EP There’s no one new around you., which is directly referencing the popular dating app Tinder. When swiping left or right, if one were to run out of prospective dates, Tinder pops up the message “There’s no one new around you.”. Pronoun ended her set smiling, she thanked all of the bands for having her, took a selfie with the crowd and walked backstage to the sound of applause.

The following act was band Elvis Depressedly, whom it was clear already had some fans in the audience. As lead singer Matt Cothran walked onto stage, it was apparent the crowd was in for a unique performance. Cothran approached the microphone with his long hair styled into two pigtails and spoke with confidence as if this were the case every day of his life. I would say the band did not receive the same reception from the crowd as its predecessor just twenty minutes before, however they still performed at a high caliber. Songs like their popular “Weird Honey” and “Pepsi/Coke Suicide” drew some interest, however in all it seems as if the band was worn down from the tour. This was until their final track “Rock N’ Roll”, in which halfway through Cothran trailed off into a fictitious spiel of meeting God and all of the religious apostles at the gates of heaven. This lead to a heavily-strummed breakdown of the instruments with Cothran screaming into the mic “There’s no such things as rock n’ roll!”, followed by all the band members falling to the floor still playing their instruments to end their set.

Finally, it was time for Turnover to take the stage. With neon green and pink lights glowing up the platform (the notorious colors of their most recent album Good Nature) the band entered in no rush despite the crowd screaming for its favorite songs already. The room grew silent as everyone awaited the same track the band had used as its opener all tour; and they did not disappoint. As the first note of the popular song “Super Natural” was played, the standing room erupted in excitement. Singing in unison with Getz, the room recited the starting lyrics “On the last weekend before the fall, down at the beach carnival”. At the conclusion of the song, the buzz at the TLA was officially cultivated, which caused Getz to reminisce on the microphone about the memories he had of Philadelphia and the many house shows the band used to play around the area.

The band then performed “Hello Euphoria” a song from its previous studio album Peripheral Vision in order to differentiate between records. The band strayed away from playing its debut album Magnolia due to its heavily pop-punk sound and its contrast to their new sound. Turnover has gone in a very different direction since then and therefore, the band continued to play only its two latest LPs. Before playing a block of songs from Good Nature, the band played its most well-known song “Dizzy on the Comedown” and promptly it seemed as though everyone in the crowd began to pull their phones out. The room was full of snapchat recordings and even one fan whom I saw crying on facetime; just overwhelmed hearing what I assume to be her favorite band digitally.

After a block of tunes from Good Nature, including hits like “Pure Devotion” and “Butterfly Dream”, the band played out a final mix of tracks. The song “Bonnie (Rhythm & Melody)” was played with pure emotion that amplified directly to the crowd’s reaction, which makes sense as right before its performance, Getz claimed it to be his favorite song off the new album. To finish off the night, the ominous start of my personal favorite song from the band began; right after Getz thanked everyone for its favorite concert the band had ever played in Philly. The guitar intro began and the haunting lyrics spread across the room, “I found the picture that we took when we brought in the New Year, it’s hard to see but I remember”, and the song “Cutting My Fingers Off” began. At the conclusion, the house lights popped on and the crowd was suddenly being forced out into the cold again. However, all three bands delivered a performance that would be sure to leave each individual a little warmer at the end of the night. 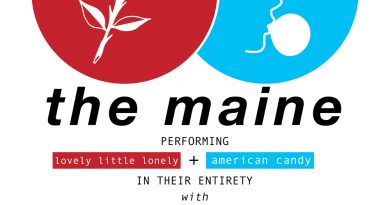 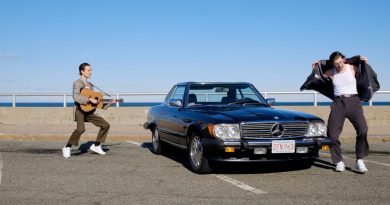 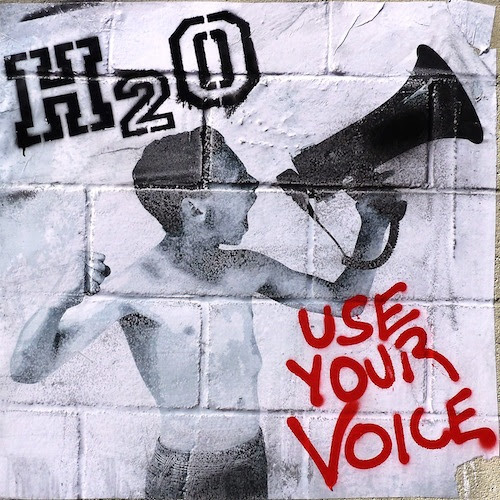 I Don’t Want to Use My Voice